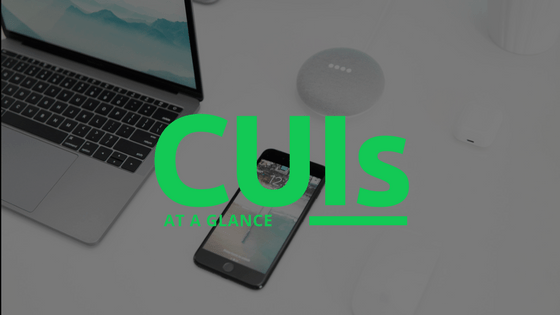 When we think about voice assistants and chatbots, Apple, Google, Amazon, and Microsoft may seem the obvious Conversational User Interfaces leaders. But who else is betting big on this emerging technology? Here we disclose the companies and key-players behind the latest innovations and advancements.

Conversational User Interfaces (CUI) allow interacting with computers on human terms. They mimic chatting with a real human and are able to understand the user when they tell them what to do.

When we talk about CUIs we talk about voice assistants (usually task-oriented) but also about chatbots, two technologies that have attracted a great interest from the big audience.

Although they may seem a recent concept, the origins of dialogue systems go as back as the 1960s when the MIT created ELIZA. A primitive psychoanalyst chatbot that was able to give back what the patient had said.

This system had a great influence on today’s voice assistants, which appeared in 2011 when Apple incorporated Siri into the iPhone. It did not take much for its competitors to launch similar solutions. Microsoft released Cortana, Google launched Google Assistant (aka OK Google). And Amazon was the first to incorporate their conversational AI, Alexa, into a specialized device: Amazon Echo, a smart standalone speaker.

These conversational agents, in addition to integrating a voice interface, also act as personal assistants and are able to perform simple tasks like making phone calls, read messages, or setting alarms and reminders.

The applications of this technology are still growing, and extend to areas such as driving aids, marketing, or the care of the elderly, in which chatbots are a key piece. So here we list the conversational user interfaces leaders; the companies and countries that will be responsible for the innovations to come in a technology with such great potential.

The leading organizations working on Conversational User Interfaces (CUI) are all big tech or communications corporations. And they are either American or Asian. Out of the top 10 entities, eight are based in the USA, while the other two are Taiwanese (HTC) and South Korean (Samsung).

Although the leading voice assistants of the moment are Siri (Apple), Cortana (Microsoft), and Alexa (Amazon), one of these organizations is not among the most innovative ones. In order to find Amazon, we have to go down near the 30th position.

Although it may seem they have not been so active during the last and recent years, the truth is that their intelligent assistant Alexa and their Echo device were already very advanced in comparison with their direct competitors.

But they are not resting on their laurels. Their Echo speaker is in continuous evolution, and they have recently launched Alexa for Businesses. Besides, as part of their corporate strategy, Amazon has started a VC Fund. It aims to find, accelerate, and back up those projects compatible with Alexa to sow an Alexa-oriented future.

And they are not done yet! Amazon has strategically partnered with GE, to make Alexa compatible with GE Appliances’ suite. This will allow (and already is) Amazon to control the growing market of Smart Homes.

Regarding Academia (Universities and Research Labs), the first entity innovating in CUIs is the MIT. And to find them, we have to go down after the 20th position. Since 2014, they have been awarded 2 grants (to develop projects with both Google and IBM) to improve the understanding of the computers’ language.

As the Conversational User Interface leader, Microsoft has experienced a very productive year in 2017. They have been working in systems to improve the understanding capacity of Conversational Systems by means of the user’s looks or gestures. And they have several patents on the matter.

As for Apple, they have filled no less than 26 patents and 10 trademarks in conversational user interfaces since 2010. They are the second entity with more patents in the field, right behind Microsoft.

For example, already in 2011, they patented a method for “automatically adapting user interfaces for hands-free interaction”. The same year they released Siri.

And what are they patenting TODAY? In 2017 they have filled different patents ranging from battery-usage assistance to taking into account context information in order to make their assistants more intelligent. But the most interesting one is a “multi-command single utterance input method”: a single “order” that has multiple actionable commands.

Although int the top organizations ranking two of the companies are Asian, when looking at the aggregated set of data Linknovate has collected for the Conversational User Interfaces leaders, we can see that the leading countries in CUIs are the United States (as in everything tech-related), and European powers. This is due to the work and growth of their SMEs.

Some interesting companies from the United Kingdom are Phillips, Capito, and Deeson. Phillips has filled two patents related to telehealth communications and a system for providing feedback to a user in regards to its behavior. Capito Systems has developed a speech assistant technology for mobile commerce. And Deeson Group has been awarded an Innovate UK Grant to develop ‘Smart Cultural Journeys’, using AI-powered cloud-based solutions, and conversational interfaces to augment a user’s journey and discovery of a new location.

In Germany, Bragi has patented a wearable earpiece that is able to interpret voice commands. And in Spain, Verbio Technologies has been awarded an SME-2 grant to adapt Deep Neural Networks (DNN) to speech and text recognition, which is disruption the communications between humans and computers.

Conversational User Interfaces main trends comprise the development of Service Interfaces as well as the use of Interactive Data to improve the intelligence of the assistant and make the experience as human (interactive) as possible.

Using Linknovate’s platform, we have found three USA-based interesting startups that are working in CUIs from quite stimulating perspectives.

Semantic Machines aims to achieve the AI needed to make conversational computing a reality. A system capable of maintaining a coherent conversation with the user. To this aim, they have raised about $20M in financing since 2014.

Another company that has recently received an injection of money is Pypestream, which has already collected $ 22.5M since 2015. Their AI-fueled customer service bots are able to offer promotions, process transactions, or even provide multimedia content. A great service aimed at the automotive, financial services, and Healthcare industries.

Finally, Kasisto is known for being the creators of KAI, a conversational AI platform with industry-specific smarts. But they have gone a step forward by developing KAI Banking, a platform with bots and virtual assistants with financial knowledge. Just like any banker, they can help the user find new financial products, manage money, analyze spending, or make payments.

Conversational user interfaces are shown as one of the top technologies in terms of growth in recent years. And it promises to continue evolving given the great technological giants are betting strong. The race is open.